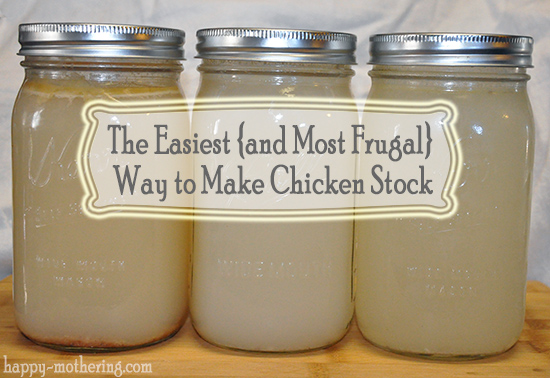 I have been making my own chicken stock from scratch for a few years now. I used to use the traditional stovetop method, which gave good results, but was time consuming.

I’ve also used a pressure cooker to make chicken stock. This method is great if you need stock for a soup in a very short period of time, but the high heat and pressure destroy many nutrients and the gelatin in the process.

Several months ago, I started making chicken stock in my crockpot. I love that I can essentially set it and forget it.

The process is super easy. Start by filling your crockpot with as many pastured (or organic) chicken bones as you can fit in there – the more the better. Better quality bones will make a better quality broth.

If you want, you can toss a chopped onion, a carrot, celery, garlic and more in the pot with the bones – but that isn’t necessary. I also like to add around a tablespoon of quality sea salt.

Then the final touch is a splash of apple cider vinegar. The vinegar helps leech the minerals from the bones into your broth.

After that, put the lid on your crockpot, set it to low and allow it to simmer for around 12 hours. If everything went well, you should have a thick, rich stock that, when cooled, will gel nicely. 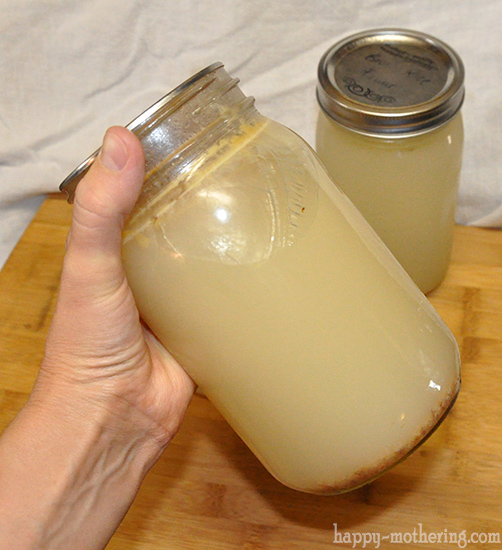 While it’s still hot, I use a ladle to fill mason jars with this nutrient-dense broth (I use a mesh strainer to catch any chunks). After the jars are cooled, I store these jars in the back of the fridge where it’s extra cold and the broth lasts for at least a week back there. I make soups, cook rice in it and try to sneak it into every recipe possible.

Don’t toss those bones yet. This is where the frugal part comes in. Fill your crockpot back up with water and go through the entire process again. There’s still life left in those chicken bones!

The quality of your bones really matters. I have found that one batch of good bones can go for up to 3 rounds. If I do a third round, I usually cook it for 24 hours. Each batch will get a little clearer and a little less dense. But the broth adds so much more flavor to food than water!

I have made stock from conventional chicken bones and it tastes good, but not as good as the broth from our pastured chickens. I also find you can’t go as many rounds with conventional bones either. But some broth is better than no broth.

I often freeze or can (read how) the broth from the second and third batches for later use, unless I know I’m making something that week that will require that much broth (it will get plenty of use this winter).

I will never make chicken broth any other way after discovering that I can get upwards of a dozen quarts of broth from one batch of bones! We’ll have chicken broth put up for the entire winter, which is great because I love making soups in the winter.